Recovery from Boston was going well and then over a week ago, at track, the tightness in the calf came back. I iced, took ibuprofen and tried running two days later only to walk home 3 miles.   5 days later I tried running again and less than half a mile later the calf strain was worse and climbing up into the hamstring. Back in February when the hamstring injury first reared its ugly little head in a race, the pulling started in the upper calf, climbed to the back of the knee and into the hamstring.  Worried (standard fare for me) but not derailed, I did some research on the hamstring and wrote a blog post called Ham on a String.
Wanting to the nip the issue quickly, I went to the PT back in February and had the ASTYM treatment done and was running again soon but not without another hamstring fit and then an IT band issue on the other leg. Basically since February, I have been running/resting due to some sort of “injury”.  Believing injuries are due from weak muscles,  I have been diligent about doing single leg bridges, monster walks and clam shell trying to keep the hip/glute muscles strong.
Although the PT I went to used ASTYM as part of the treatment, he never mentioned anything that would cause the issue to begin with.  As is true with many PT's, he treated the symptom and not the underlying problem.   I felt like I knew more about the exercises than his assistant, who would randomly pull a number out of the sky and make it known that it was random, like I could choose to wear a blue shirt or green shirt but it really doesn’t matter.
I’m already a DNS for a half marathon this weekend and while I'm bummed, I'm looking forward to two Ragnar races next week.  I have teams that are counting on me to be there and healthy.
Since resting 5 days didn’t improve my injury, I have a new plan.  My recovery plan is as follows:
And the last part of my plan is my secret weapon, a gift from Coach Dean, a pink magic wand.  As a magic wand, it must not be used willy nilly but with intention and a few magic words…
HEAL! DAMN IT! 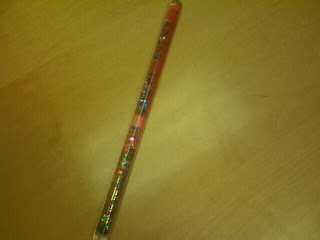 Happy Running!
Posted by Christina at 10:40 AM

Oh this is a great one. I told you The Wand would work. You're doing the right things!!!