I was cold all night long.  So much for my hopes of a great nights sleep.  John had talked me into taking his old sleeping bag instead of mine because his compresses smaller.  Bad move. Why I would take his when he was always cold is unknown to even me.  I was trying not to be a terquita (little stubborn one) when I agreed to take his.  I also thought it would be warmer at night, again, underestimating the trip in its entirety.   I was so cold and my hand kept falling asleep because I would curl up, lay on my arm to try and get warm and cut off circulation.
We packed up our tent and sleeping bags into our packs, set them by a rock and went for a day hike to Angels Basin. Angels Basin was supposed to be the prettiest spot in the Superstition Mountains.  By that point, according to the map, we learned we had camped at Hole Springs.  It was more boulder jumping and bushwhacking on the trail and we were really glad we didn’t have our packs on.  It was a very tough hike. It took us over an hour to go the 1.5 miles and when we stumbled onto what I thought was a trail  on the other side of the creek, we were brought  into a clearing. Since Angels Basin was supposed to be the prettiest spot in the mountains I expected the heavens to open up and hear angels singing. It was a big meadow area, with lots of camping spots but nothing spectacular. 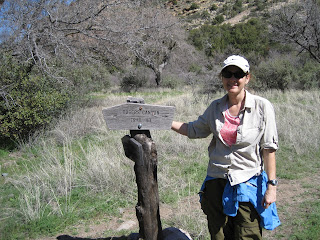 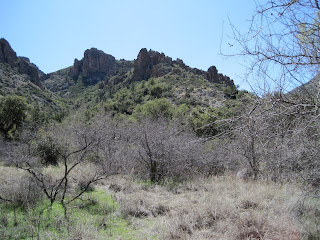 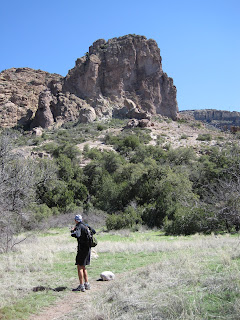 I’m glad we camped by the spring and trees than in an open field where there had been a lot of other people camped out.   We headed back towards our campsite and posed for pictures at the huge agave plant. 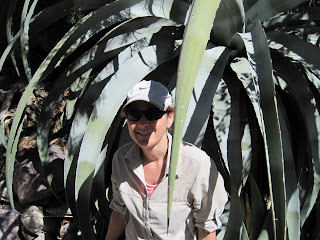 Our initial plan was to stay 2 nights at Angels Basin and then do a 12 mile day hike as a loop.  Since we didn’t make it to Angels Basin we revised our plans.  Another hiker and his 11 year old daughter were supposed to join us the second night.  Since we didn’t make it to Angels Basin, we didn’t think they would make it either and figured we would meet up with them as they made their way.
Getting to the top mesa, where we would camp, was relentless with the uphill, back through the cactus forest in the 2 o'clock full sun.  We hadn't run into our friends yet and figured they changed their minds and didn't come out for a hike.  Around 5pm we were setting up camp and I hear voices hiking along the trail.  Sure enough it was our friends and the 11 year had a full size pack just as big as she was (although I'm sure dad carried the bulk of the weight).


This 11 year had more spunk, wit and a bigger backpack than us. She's my hero. 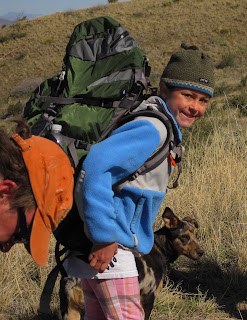 They also brought along their dog and I never thought about it but when you travel with a dog, you also have to pack in food and water along with dishes for the dog.  That's substantial weight. They should get a pack thing for the dog and the dog could carry its own gear. 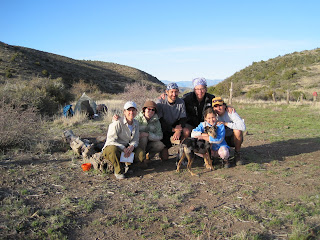 It was starting to get cold and although I was hopeful with the warm day it would be a warmer night (and warming sleeping), we were at 4700 feet in elevation and it was getting cold fast. Our friends opted to sleep under the stars and I worried for the little girl sleeping in her nylon sack.  At least we guilted dad into giving her his knit cap.
Right after the son went down we climbed into our tents and sleeping bags and John and I played our continuation of the Rummy game from the night before. I think he was on the nice side and let me win. I still had on all the clothes I brought with me and although I was still cold, I at least felt warmer than the night before.
Posted by Christina at 6:00 AM

Email ThisBlogThis!Share to TwitterShare to FacebookShare to Pinterest
Labels: hiking

Some beautiful pics there. Must have been a lovely experience.

I still have not been back-packing, mainly out of fear. You make me want to finally challenge this. Your trip, even with the modifications, sounds fun! A trip is always way more interesting when the unexpected happens...I think it then turns into an adventure.

I love, love, love Rummy. I don't know many people who play this. My family was big into card games.

Thank you for sharing your adventure!

That's what I call roughing it. Great pics, thanks for sharing.

I love the pic of the 11 year old.What a smile.