Bring on the drugs: Altitude, Diamox and Coca Leaves on the Way to Machu Picchu

I knew physically I would be able to handle the 5 day/4 night trek to Machu Picchu but what I didn't know is how would I handle the altitude? 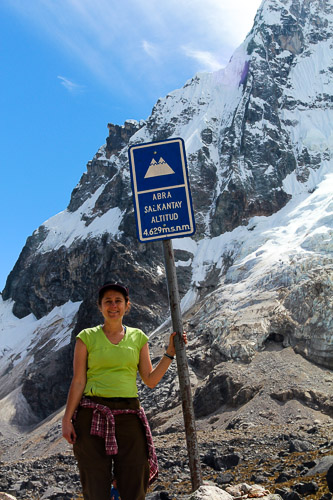 I live in Phoenix which is a whopping 1100 ft. When I drive up to Flagstaff, which just under 7000 ft, I get a headache.  Last year John and I went camping up at Flag and not only did I have a headache, I was extra sleepy, my breathing was shallow and I slept in till 8am (a very rare occurence) and John thought I died during the night.

I researched medications and chose to take Diamox to help with the altitude sickness.  One of the possible side effects of Diamox are the same symptoms of altitude sickness so it's recommended to test the drug prior to requiring it.  I didn't test the medication and hoped for the best. I started taking it as directed a day before I landed in Cusco.

The very first indication I had that I was in altitude was a flight of stairs.  Up to that point it didn't occur to me that I was at 11,200 ft in Cusco.  I didn't have a headache and wasn't any drowsier than one would expect after 3 flights lasting almost 24 hours including layovers. I started up the steps and quickly realized I wasn't in Phoenix anymore.  I stopped, caught my breath and swore under my breath.  My legs, lungs and ego hurt and I wasn't even hiking yet.

Diamox will not make the hike any less physical and won't change the fact there is less oxygen the higher up in altitude you travel.  It should help you with some of the side effects like headaches, pins/needles, shortness of breath (within reason), fatigue (uhh, not really) and swelling of hands and feet.  I didn't have issues taking diamox and still had headache and pins/needles in my feet but I imagine had I not taken the medication, it would have been worse.

The coca leaves were interesting. Some people didn't like them but to me they tasted green.  I had some shortly after getting off the plane because I was curious.  Like a cow, I chewed my leaves and didn't throw up, die or get high.  On the hike Hector, our guide, explained he put a wad in, chewed them some and kept it on the side of his mouth. Having something leafy sitting on the side of my mouth didn't work for me and I spit them out within 5 minutes.  After that my gag reflex kicked in and I couldn't put any in my mouth.

The coca leaves do not make you high but you will test positive for a cocaine test.  After returning I read up on the coca leaved and learned you'll test positive for a drug test for 72 hours.  I didn't see a scientific study on this though.  So if you are a flight attendant, work for the FAA, have a drug test for work coming up, don't risk drinking coca tea or eating the leaves or candy and stick to vitamin I, IB Profin.

Posted by Christina at 5:56 PM

That is interesting! I've seen on some of my altitude runs how runners from the coast really suffer. I live at about 6500ft. This is definitely a plus for running in the mountains. We don't have very high mountains but go to about 10200ft in some races. My race in July will go to 8400ft.